The yasni GmbH, operator of the people search engine Yasni (e.g. www.yasni.de, www.yasni.com), has successfully advanced its foreign expansion in 2011 and closes the fiscal year with a profit in the mid six-figure range.

According to Comscore Yasni was amongst the Top 50 websites in Germany in 2008 and was the fastest growing Top 100 site. Ever since we have quadrupled our traffic and are not only set among the Top 30 websites in Germany but also among the largest worldwide. Yasni is one of the few websites that can show sustained traffic growth.

The turnover has even been more than sixfolded since 2008 and since the middle of 2010 Yasni has made a profit every month. Within the fiscal year 2011 the seven-figure internal turnover of 2010 could be increased by more than 50 % and the profit has been multiplied to a mid six-figure amount.

Steffen Rühl, CEO of the yasni GmbH: “Although Yasni is neither made in Berlin nor will be hyped, it has been strongly growing in all business segments for years now and is, above all, internationally successful!”

Our 20-member team expanded the Yasni site by five more languages and developed six new country versions with the respective local search index within the last 12 months. In the beginning year 2012 Russian as new language has already been launched and a comparable jump in turnover as well as a seven-figure profit is planned for the current year.

The all new Yasni.com Facebook group has just been launched and allows us to keep you guys up to date with all the latest Yasni news! Not to mention, enables us to show off all of our wonderful global coverage!

You can find the group at http://en-gb.facebook.com/pages/Yasnicom-find-yourself-online/91053483145 and we would love you to come along and become a fan of our group!

The Facebook group also allows us to share any breaking news stories surrounding online privacy and personal online reputation management so be sure to check back regularly for interesting updates!

If there is anything else you would like to see on the Yasni.com Facebook group then send us a message and we will try our best to include it!

About a week ago our ‘Head Yasnian’ Steffen Ruehl was featured in a Q&A on one of the top US business publications, BNET.com.

It was a tough (but fair) interview by Erik Sherman, and I think Steffen did well. 😉 If you’re interested in the interview then you can find it here. 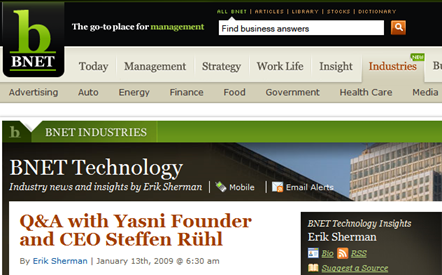