Have you heard about QPACE which is a German engineered supercomputer?

It is almost a paradigm shift for a mass of energy hungry machines: from an environmental friendliness perspective!

QPACE was recognised as the most energy efficient supercomputer in the world. This recognition was given to it at the 2009 Supercomputing Conference in Portland, Oregon, USA.

What else is special about QPACE? It was developed by an academic consortium of universities and research centers as well as the German IBM research and development center in Böblingen within the framework of a state-sponsored research association. It has best of both academic, corporate and government power. In fact the QPACE core team consists of 20 researchers and developers.

I decided to blog about QPACE for two key reasons.

The first reasons is until recently, performance of supercomputers was solely associated with speed. Very little or no focus was on the energy efficiency. Supercomputers consume super amount of energy which make them environmentally unfriendly. Why do they produce so much energy? Because of the processing power! For example, each of the QPACE installations in Jülich and Wuppertal can reach a maximum performance of 100 TeraFlops (double precision). That equates to 100 trillion (100,000,000,000,000) computing operations per second.

The second reason is relating it to my blog category which is schreIBMaschine. How does it relate to schreIBMaschine? It directly relates because the heart of QPACE is the IBM PowerXCell 8i processor, an enhancement of the Cell/B.E. processor, which originally was developed by Sony, Toshiba and IBM for the Sony PlayStation 3. This means a lot of smart brains worked on this innovative piece of machine which may have serious impact on our lives.

You can download a full text free scientific paper about QPACE published in a conference by Peking University, Beijing, China from this link.

Over to you now…
What do you expect from Supercomputers from functionality and operational perspective?
How can supercomputers help us improve our lives?

Today we’ve received some indeed outstanding coverage from the UK. Our website yasni.co.uk was featured (small but mighty!) in UK’s second largest daily newspaper The Daily Mirror and they mentioned us on their website as well. All according to the motto, “Make assurance double sure…” 😉 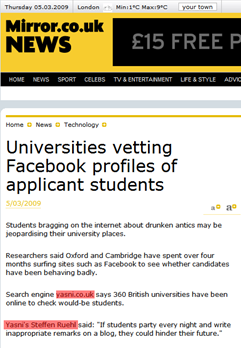 Our thanks goes to “The Daily Mirror”!